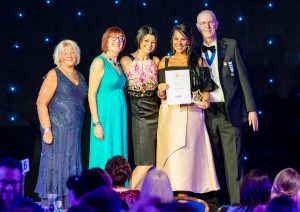 ASMS won the NODA Award for Best Concert 2019 in the North Region.

Making it four years in a row that this award winning society has been recognised for their outstanding productions.

The National Operatic and Drama Association (NODA) annual awards evening was held at the Grand Hotel Gosforth on 14th September 2019.

The directorial team of Leonie Airlie, Kellie Hughes and Lynne Lambert were there to receive the award from Regional NODA Representative Kathryn Curry and Regional Councillor Gordon Richardson.

Kathryn Curry, who has been involved in amateur dramatics for over 30 years, said “I was blown away by this show – it was amazing to see so many talented individuals pull together to create one of the best concert productions I have ever seen”.

Because the Playhouse closed at the end of 2018 for major refurbishments the show was staged at Alnwick Learning Centre on Lindisfarne Road. The transformation from old school hall to cabaret night club was quite a challenge but the Playhouse team, helped by ASMS members, managed to create an intimate setting fit for any production.

Kellie Hughes, who along with Leonie Airlie, took on the directors roll for the very first time said “We are absolutely thrilled to have won the NODA award. When we came up with the idea of writing our own show, our aim was to showcase the wonderful array of talent that we are so lucky to have in the society and help raise funds for the Alnwick Playhouse appeal whilst doing so. Never in our wildest dreams did with think we would be nominated, let alone win again this year so it truly is the icing on the cake to what has been a incredible experience.”

Susannah Clapcott, who performed the song Cabaret made famous by Liza Minnelli’s Academy Award winning performance in the 1970 film version of Cabaret, was also nominated for a Best Performance award.