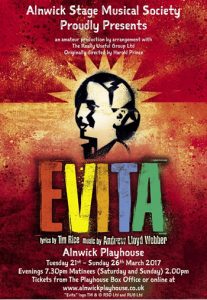 In 2017 Alnwick Stage Musical Society won three NODA (National Operatic and Drama Association) prizes for its performance of Evita in District 9 (Northumberland) and landed the Councillor’s Award for the best production in the whole of the North-East region – ‘a truly wonderful evening’s entertainment’. In the Northumberland district, the show won the Musical Production title while Juliette Bell and Darren Lewis were nominated for the Individual Performance Award, with both being described as ‘worthy of any West End Stage’. Darren won the crown and was also nominated in the overall Councillor’s Award for the best performance.

The society’s chairman, Carol Knowles, said: “We were absolutely thrilled. It’s our 30th year so this was really the icing on the cake.”