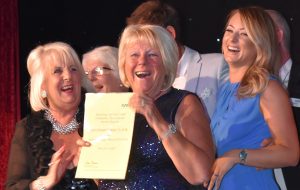 For the third year running ASMS has been recognised for its high quality productions by winning yet another set of NODA Awards.

At this years National Operatic and Dramatic Association’s (NODA) awards evening, that took place on Saturday 15th September, Alnwick Stage Musical Society (ASMS) swept the boards and won all three of their nominations making this the third year in a row that they have been recognised for their incredibly well produced shows.

This year ASMS won best musical for their production of My Fair Lady, Leonie Airlie won best lead for her roll as Eliza Doolittle and Mark Stenton won the prestigious Regional Councillors Individual Award for his portrayal as Alfred P. Doolittle. Societies from across the north region, which covers an area from North Yorkshire to the Scottish Borders, came together to celebrate the very best that amateur dramatics has to offer at this annual occasion held at the Grand Hotel Gosforth Park in Newcastle upon Tyne.

Kathryn Curry, My Fair Lady director and choreographer, said “I cannot believe we won best musical. What an accolade! I feel so privileged to have directed and choreograph My Fair Lady. It really was a team effort from our amazing crew, tireless patient costume ladies, superb props, and an amazing cast who rehearsed beyond my expectations.” She added “My congratulations to Leonie who won best adult performer and Mark who won councillors award for best performer… what a night to be remembered.”